Prevalence of Gastroduodenal Disease with Helicobacter Pylori in the Region of Tiaret, Algeria

The discovery of H. pylori in 1982 revolutionized the understanding of pathophysiology and the management of gastroduodenal disease and as such represents one of the most significant recent advances in microbiology [19].

H. pylori is found mainly in the stomach, both in the antrum and in the funds, and can be isolated from gastric fluid under normal acid conditions [22].

The highest prevalence is observed in developing countries such as Latin America and Africa, which appears as an index of socioeconomic level [21].

H. pylori infection is probably the most common infection worldwide and is estimated to affect about 40% of the world population and 20-90% of adult individuals are infected depending on the country, with infection being more common in disadvantaged, low socioeconomic settings (Joutei et al., 2010).

The prevalence observed today is the consequence of socioeconomic conditions and the environment [20].

According to a scientific study, H. pylori, a bacteria living in the gastric environment, affects more than 90% of the Algerian population [30]. Gastroenterology specialists are sounding the alarm bells because they believe this disease could become the disease of the century [16].

Our work is carried out within the framework of a prevalence of H. pylori-related gastroduodenal diseases in the Tiaret region of Algeria.

In this study, the objective was to assess the prevalence of gastroduodenal disease with H. pylori, 260 patients consulting gastroenterologists in the Tiaret region, and to study their distribution according to implication or not of H . pylori in the disease, sex, age groups, and type of pathology related to this bacterium.

This is a retrospective epidemiological study involving 260 patients with gastroduodenal disease (110 men and 146 women), ranging in age from 12 to 82 years. The study took place in Tiaret, from November 2014 to April 2015, and was conducted in gastroenterology practices.

Our study is about the Patient:

Among the 260 patients suffering from gastroduodenal diseases, we found 152 patients infected with H. pylori, giving an infection rate of 58.46%. The results are shown in the following histogram.

HP-: Not infected with H.pylori

Figure1. Percentage of patients infected or not with Helicobacter pylori 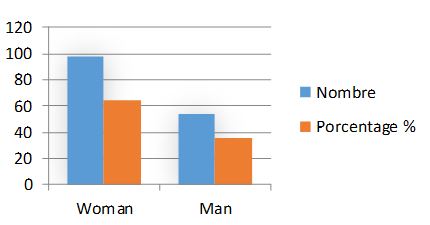 Figure 2. Distribution of Helicobacter pylori infection by sex of patients

We observed a significant increase in the prevalence of H. pylori infection with age, with a peak rate (29.60%) occurring in the 40-50 age group. The results can be represented by a graph (Fig. 3) to make the results clearer and more readable. 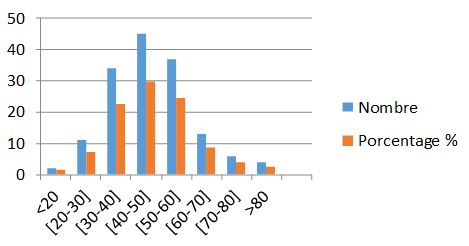 Distribution of H. pylori infection according to type of pathology 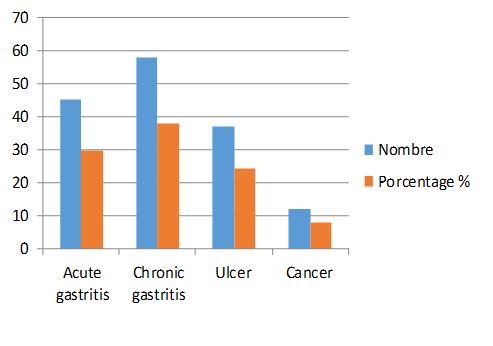 Figure 4. Distribution of patients infected with H. pylori according to type of gastric pathology

The prevalence of H. pylori infection is between 20 and 40% in industrialized countries; it reaches 70 to 90% in developing countries [19]. Whereas in our study population, the prevalence rate is 58.46%, which corresponds more or less to half of the prevalence found in Algeria (78%).

Elmanama et al., [8] demonstrated that both sexes are equally affected by H. pylori infection, confirming the results of our series. However, other studies have noted a male predominance [21].

Furthermore, if we compare by age group, H. pylori are found in our series at a rate of 29.60% in patients between 40 and 50 years of age. This average is lower than the European figures, which are around 60 years [13], whereas, in other studies of Everhart, 2000, no significant difference has been reported for age groups, some studies have shown that contamination occurs early in childhood, and before the age of 10 years, more than 50% [15].

Ilboudo et al., [17] argue that in Africa, every individual taken in adulthood and whatever his socio-economic level has lived a childhood in an environment conducive to contamination because H. pylori is responsible for the development of several gastric pathologies. It is responsible for 80% of chronic atrophic gastritis [22].  As a result of the inflammatory and immunological response induced by this bacterium, 1 to 10% of peptic ulcers and 1 to 3% of gastric cancers result from it [3]. These results are consistent with those found in our study. Indeed, H. pylori are most often linked to gastritis with a rate of 67.75%. As well, the frequency of peptic ulcers in the population infected with H. pylori was 24.34% and it was 7.89% in the case of cancer.

Moroccan authors presume that H. pylori are indeed correlated most often with chronic atrophic gastritis with a prevalence of 95.56% [1]. It is now clearly established that H. pylori are responsible for gastric cancer and that no such cancer develops in the absence of this bacterium [6]. Nevertheless, the number of patients at risk of developing cancer is small compared to the size of the population infected with H. pylori [26], this is consistent with the results of our series where 7.89% of our population had developed cancer.

This study shows the very high prevalence of patients suffering from gastroduodenal diseases in the region of Tiaret, which reveals incriminating Helicobacter pylori. These results also show that age, sex, and pathology are factors playing an important role in the prevalence.

The author declares they have no conflicts of interest.

The author received no financial support for this research.

The authors would like to sincerely thank the personnel of Hospital Center Youssef Damedji–Tiaret, Algeria for their contribution to this study. Special thanks to Dr. Belarbi Mohamed gastroenterologist for his help.

29. Thomson AB, Chiba N. (1998). From bench to bedside and back- 2. report on the European Helicobacter pylori Study Group Xth International Workshop on Gastroduodenal Pathology and Helicobacter pylori. Can J Gastroenterol. 12(6): 437–446.

Copyright: Tabak S, et al. © (2022). This is an open-access article distributed under the terms of the Creative Commons Attribution License, which permits unrestricted use, distribution, and reproduction in any medium, provided the original author and source are credited.

Prevalence of Gastroduodenal Disease with Helicobacter Pylori in the Region of Tiaret, Algeria

Endometriosis – an indication for cannabinoids?

Open Access by Magnus Med Club Ltd is licensed under a Creative Commons Attribution 4.0 International License. Based On a Work at magnusmedclub.com